The war booty of over 1000 books brought to Sweden from the Czech lands towards the end of the Thirty Years’ War is stored in the Chapter library in the Swedish town Strängnäs. The Chapter of Strängnäs obtained them as a gift from Queen Christina in the 1750s, and there were originally more books than there are today. The Queen’s aim was to support the Bishop of Strängnäs, Johannes Matthiae, who was friends with John Amos Comenius, and a distinguished figure in Lutheran Orthodox Sweden, mainly thanks to his advocacy of tolerance towards other religions. Since the royal gift contained largely theological literature of various Christian denominations, it was symbolically placed in the local cathedral, one of the most significant religious centres in Sweden. The Chapter library can be found in the Strängnäs Cathedral even today, after almost 400 years. 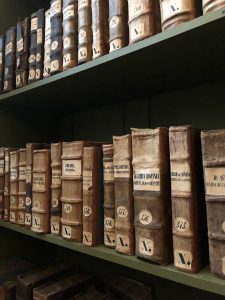 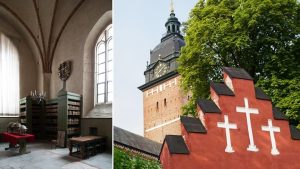 The looted books have never become an integral part of Strängnäs Chapter library. Following Johannes Matthiae’s forced resignation, the books came to be a private collection, receiving only minimum care. This was evident from their physical condition after one hundred years; therefore, at the initiative of a progressive Bishop, Jakob Serenius, the Chapter decided to reorganise the collection in the middle of the 18th century. The reorganisation involved, however, a very radical step – selling a part of the collection in a public auction.

A special auction catalogue was published, containing brief information about the books for potential buyers. However, the records are rather brief and at times inaccurate: some books are described too vaguely, as “Liber bohemicus”. Thus, we must accept that we cannot clearly determine particular editions or book titles in nearly a quarter of the catalogue. The books from this auction were marked by distinct red numbers, which today represent an important point of reference for investigating the preserved specimens. 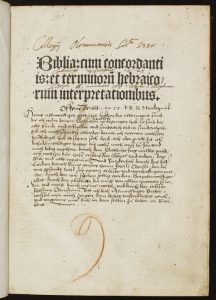 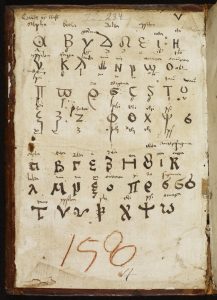 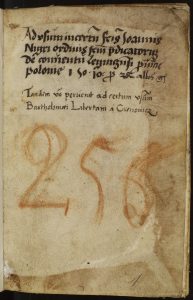 What was on sale?

Even though the Chapter declared, on the auction catalogue’s front page, that the books were duplicates, and that did indeed account for a significant number of them, this was by no means the case for all of them. There were 1055 prints selected for sale, diverse in their content, and with a wide spectrum of authors ranging from Attic times to the first half of the 17th century. Three quarters of the books were theological treatises, especially medieval tracts and works of later Catholic authors. The rest of the books covered not only histories of countries, ecclesiastical law, treatises on philosophy and rhetoric, but also music in Czech and German hymnals. The nature of the auction books’ contents is reflected in their predominant use of Latin.

A fundamental criterion for choosing books for the auction seems to have been the size of the volumes and, more importantly, their age, rather than their content: a substantial number of the auctioned books were of a large size and had been printed before 1550.

It can be assumed that the oldest printed books, the incunables, were among the most interesting; in the 18th century, these became valuable artefacts for not only private collectors, but also several institutions. Taking this into account, Strängnäs Chapter selected over two hundred incunables in their original leather binding; a whole range of books were richly decorated by introductory initials complemented by drolleries and leafworks. Even some of the newer books chosen for sale ranked among the grander publications, with an attractive introductory page. 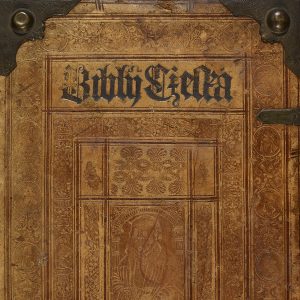 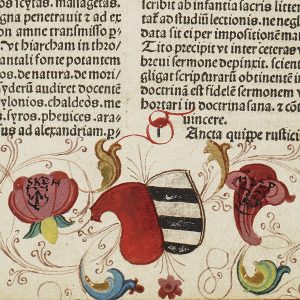 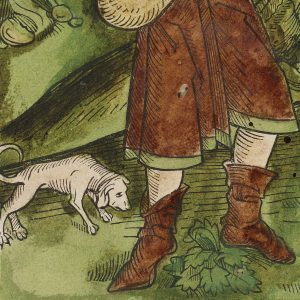 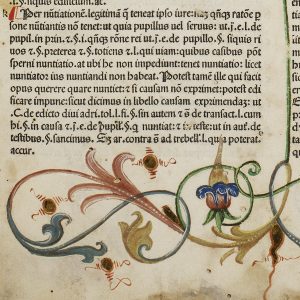 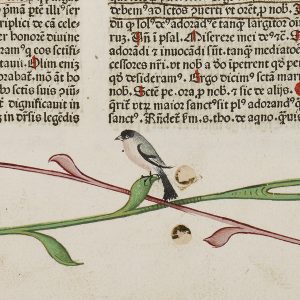 The front page of the auction catalogue advertised books “from ancient libraries from Prague and Olomouc”. That the Chapter quietly offered a relatively large number of books from its historical fund is a lesser known fact. This fund consisted of 102 prints from the second half of the 17th century, listed at the end of the catalogue. Preserved specimens show, however, that other books belonging to the Chapter were dispersed among those looted from the Czech lands, and these were by no means second rate: one example is the incunable that belonged to Kort Roge, a renowned Strängnäs Bishop (1425–1501), who, among others, introduced the printing press to Sweden and donated his entire library to the Chapter. The mention of the “exotic” Czech origin of the books on the catalogue’s front page thus seems to be an effective marketing move, which was designed to attract foreign collectors.

For the most part, it is impossible to find where the auctioned books originally came from; nevertheless, it seems that a substantial number of them originated in the monastery libraries in Olomouc (approximately half). The rest were brought from Rosenberg’s and Dietrichstein’s libraries, though the latter was not mentioned on the catalogue’s front page. There was a relatively high number of books written in Czech (in total 38) in the auction. Although some of them are unidentifiable, the rest rank among the most interesting prints published in the Czech lands before the Battle of White Mountain: a Czech translation of a work by Francesco Petrarka; a postil by Petr Chelčický and Martin Philadelph Zámrský (the specimen sold is preserved in St Petersburg); a book of travels by Oldřich Prefát from Vlkanov; historical works from the printing press of Daniel Adam from Veleslavín; and three specimens of the Czech chronicle by Martin Kuthen from Šprinsberk. The Chapter also offered an extensive collection of prints from the Ivančicko-kralická printing house, often several specimens. The auction catalogue includes two specimens of the Venetian Bible from 1506 (one of which is preserved in Copenhagen), and the Melantrich Bible from 1549. In a rare circumstance, there were no fewer than nine editions of Řebřík duchovní by František Rozdražewský, printed in Olomouc in 1636. Swedish troops in Olomouc probably confiscated the remaining copies of this book, since its fragments appear in other Swedish libraries, for example in Västerås and Stockholm. 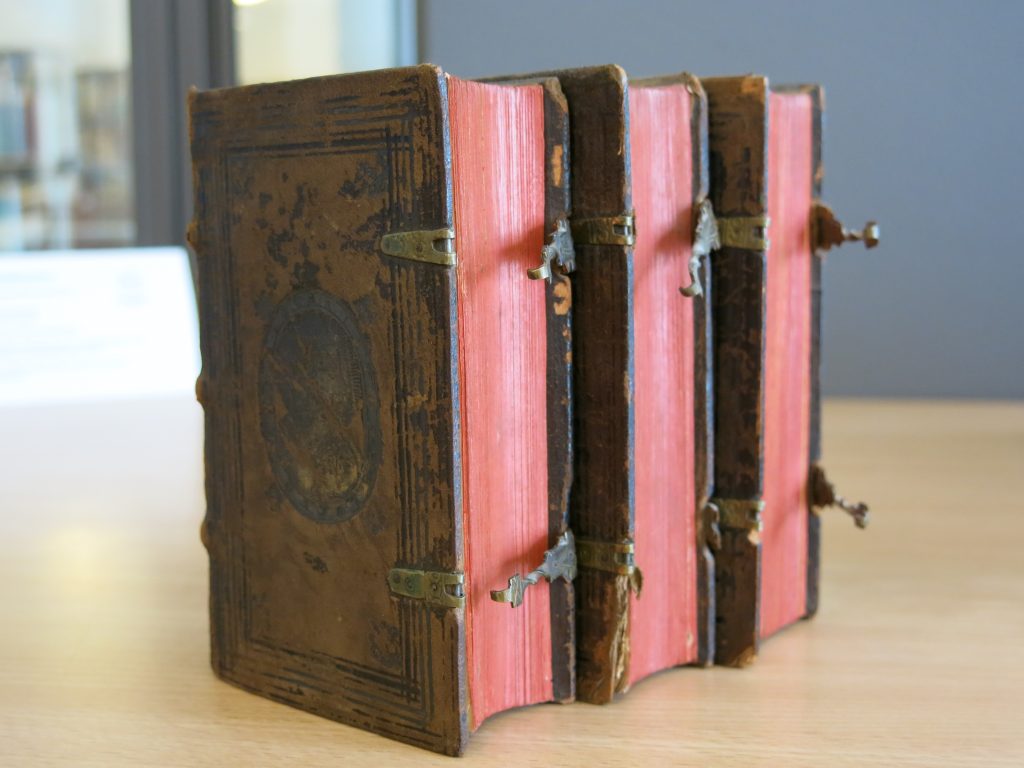 The first phase of the auction took place in Strängnäs; however, the main phase, aimed at foreign collectors, was held in Stockholm towards the end of 1765. Most of the sold books have never reappeared, nevertheless, some of them have been successfully traced in several libraries not only across Sweden, but also in Oslo and in St Peterburg. Only in the Royal Library in Copenhagen can a larger collection be found, due to the several book collections that came into its book funds from important Danish collectors, some of whom had taken part in the bidding at the Stockholm auction of Strängnäs’ books in 1765.

Most of the Czech books passed through the library of the Danish minister of state, Otto Thott (1703–1785), one of the largest private collectors in Denmark of the time. Situated in the Chateaux Gavnø, his library contained more than 160 000 volumes. After Thott’s death, the Royal Library in Copenhagen acquired all his manuscripts (4 154) as well as 6 159 printed books published before 1530. The Royal Library then bought another 60 000 volumes in a public auction; the Czech books from Strängnäs come from the oldest part of the collection. Today, we know of more than 50 incunables from the Czech lands bought by Otto Thott in Stockholm in 1765; almost without exception, these volumes had original bindings, often with illuminated decoration.

Another participant at the auction was the Danish-German clerk, Christian Friedrich Temler (1717–1780), Thott’s colleague at the Ministry of Foreign Affairs. Several Czech books from Strängnäs passed through the libraries of these two bibliophiles. Following Temler’s death, his library, which contained 8 500 books, was sold in a public auction. The specimens bought by the Royal Library in Copenhagen included nineteen books from the auction in Strangnäs. It seems that at the Strangnäs auction, Ch. F. Temler had been interested in not only incunables, but also newer books written in Czech, which was in accord with his specialisation in Slavic languages. For instance, he bought the Rosenberg’s print of the Kralice Confession. Temler’s “research” interest in the acquired books is documented in the incunable with an ex libris of the Abbot of Žďár, Linhart Šťávka from Hodonice (died after 1488). Temler even exchanged letters with H. Weinmann, a German historian who helped him determine where the book came from.

Among other Danish collectors worth mentioning, who had acquired books at the Strängnäs auction for their large libraries, were Peter Frederik Suhm (1728–1798) and a Danish historian, Jakob Langebek (1710–1775), who, similarly to Temler, focused on newer works written in Czech and Polish.

[1] A detailed study on the auction of Czech books in Strängnäs will be published in 2021 in the Czech journal Books and History.